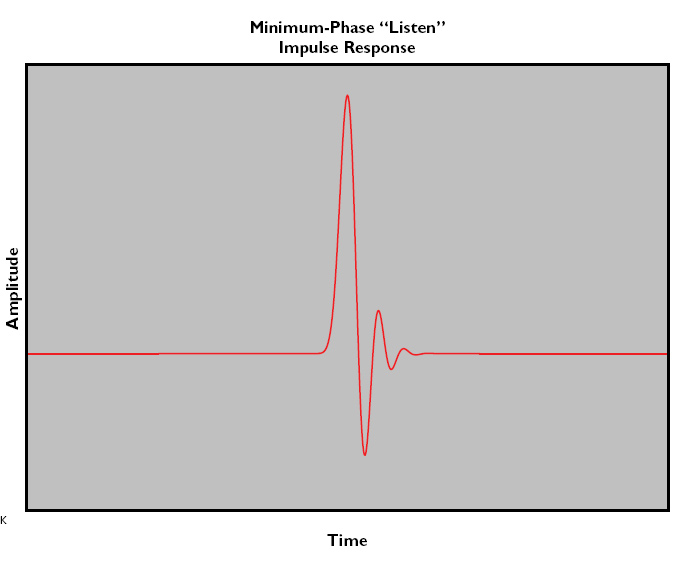 Ayre is pleased to announce the results of an intensive research program into the audible performance of various digital filters (including “non-oversampling” filterless designs). Extensive listening tests have shown that our new custom DSP-based “Minimum Phase” filters provide a significant leap forward in both musical naturalness and ease of listening. All of our current digital products use these filters, and upgrades are also available for all Ayre disc players still in production.

The Evolution of the Digital Filter

To illustrate the performance differences between various digital filters, included are graphs of their two key parameters—their frequency response and their transient (impulse) response. These graphs allow us to trace the evolution of the digital filter,
clearly showing the changes that have led to improved sound quality.
In the beginning, there was the common linear-phase, “brickwall” digital filter. This type of digital filter is used in 99+% of all modern digital equipment, for both recording and playback, including the “Measure” position of the original Ayre disc players.
On paper, it looks nearly perfect. There is no phase shift, so it is called a “Linear Phase” filter. However, a filter can only achieve a “Linear Phase” response by introducing pre-ringing. This means that before every single musical transient, there is a “pre-echo”. In nature, there is no such thing as a “pre-echo”. All events must be “causal” in the real world—the cause must precede the effect.

A sharp, “brickwall” filter like this typically introduces about 20 cycles of pre-ringing and 20 cycles of post-ringing. It is very unnatural sounding, as the effect (pre-echo) precedes the cause (musical transient). This time-smear is interpreted by the ear-brain as both a lack of image precision in the soundstage, and also a subtle smearing of the musical sounds together.

Improving the Transient Response
The first approach to solving the problems of a conventional digital filter was to use a filter with less ringing, often known as a “slow roll-off” filter. This type of filter was used in the “Listen” position of the original Ayre disc players. By reducing the “sharpness” of the “knee” in the filter’s frequency response, the filter’s transient response is vastly improved.
Now there is only about one cycle of pre- and post-ringing. The penalty (remember, there is no such thing as a free lunch—only intelligent tradeoffs) is that there is more “leakage” (aliasing) of high frequencies above 22,050 Hz back in to the audio band. Still, this only affects very high
frequencies and the levels are low enough not to cause audible problems.
This “slow roll-off” filter reduces the time smear by a factor of ~20x compared to conventional digital filters. The net result is a much more musically natural sound, as the ear-brain is very sensitive to time-related distortions. This filter provides an outstanding compromise between frequency response and transient response, and for ten years was the mainstay of Ayre’s digital audio filters.
A natural extension to this idea is to eliminate the digital filter altogether. In theory this provides the best transient response possible from a digital playback system. There are certain audible advantages to this approach, but they are highly system-dependent and come at the expense of two separate problems.
The first is a loss of high frequencies starting at -0.75 dB at 20 kHz and reaching -3.2 dB at 20 kHz. The second is that the aliased “image” frequencies are injected into the audio signal, creating non-harmonically related distortion that increases in level as the frequency increases, reaching over 50% at 20 kHz unless additional analog filtering is employed. Careful listening tests revealed that these drawbacks outweighed the gains in improved transient response, especially given the CD format limitation with its 44.2 kHz sample rate. We therefore continued examining different approaches to digital filtering.

Eliminating the Pre-Echo
In Peter Craven’s 2004 AES paper, he proposed that the playback DAC should include a digital filter that had a corner frequency below the half-sample rate of 22,050 Hz. This would filter out any ringing (pre- and post-) that was introduced during the recording process and thereafter embedded on the disc itself. He named this an “apodizing” filter. It is a mathematical law of any filter, digital or analog, that the steeper the frequency cutoff, the more ringing it will have. In an attempt to avoid the problems of this ringing, Craven proposed using a “Minimum Phase” filter instead of the conventional “Linear Phase” filter. While this means that the phase response now varies, especially at high frequencies, there is no longer any pre-ringing. Furthermore all pre-ringing from the recording process has been filtered out, and the new playback filter only has post-ringing.
Now a giant step forward has been taken in the musical naturalness of digital audio reproduction. The unnatural pre-echoes have been completely eliminated. All of the filter’s ringing occurs after the musical transient. This is just the way that sounds occur in nature. Every sound made in the real world will have post-echoes after the original sound, so the ear-brain system more easily accepts these post-echoes from the digital filter as natural. Note that the post-ringing of a “Minimum Phase” filter is greater than that of a “Linear Phase” filter with the same
frequency response. The energy that had been contained in the pre-ringing of the “Linear Phase” filter has simply been delayed until after the transient. (Remember—there are no free lunches.) But redistributing this same total energy leads to significant gains in musical realism.
This type of digital filter is not available in off-the-shelf chips. Instead, it must be implemented in custom DSP filters. In the case of the new Ayre MP (Minimum Phase) disc players, we use sophisticated FPGAs (Field Programmable Gate Arrays) to create the desired custom filter, and the chip is easily reprogrammable should future improvements be made. This filter type is used in the “Measure” position of the new Ayre MP disc players.

The Best of Both Worlds
While the “Apodizing” filter proposed by Craven solves many of the problems with digital filters, careful listening tests conducted at Ayre showed that the multiple cycles of post-ringing still created an artificial brightness and an overall confusion to the sound. We therefore sought to combine the best aspects of Craven’s minimum-phase digital filter proposal with a slower roll-off that reduced the overall amount of ringing.
The resulting filter has no pre-echoes, and only about one cycle of post-ringing. This filter is implemented in the “Listen” position of the new Ayre MP disc players. The result is simply the most musically natural digital playback available today.
In addition to the radical improvements provided by the digital algorithms themselves, several man-months were spent conducting thorough listening tests to optimize all other aspects of the filters. The powerful customprogrammed FPGAs used in the MP series allow performance far beyond that available from off-the-shelf solutions. The mathematical calculations are conducted with 32-bit coefficients, using 64-bit accumulators to ensure the greatest degree of signal precision.
A 26x oversampling rate was determined to provide the highest level of musical realism. All of the filtering calculations are accomplished in a single pass through an FIR (Finite Impulse Response) filter. This is in contrast to conventional designs that employ a cascade of 2x FIR filters, thereby losing critical precision of the audio data as it is passed to each successive filter section. Finally, the dither algorithms for both the “Listen” and “Measure” filters were chosen on the basis of careful listening tests to provide the most realistic music reproduction possible.
The Ayre MP filter provides a significant step ahead in digital audio reproduction. The CX-7e provides this advanced technology for CDs, while the C-5xe universal disc player takes this to the limit of today’s recording technology at 292 kHz and 24 bits. In addition, this exclusive advance in digital audio reproduction is included in the Ayre QB-9 USB DAC, achieving the most natural and realistic sound available from computer-based audio systems.